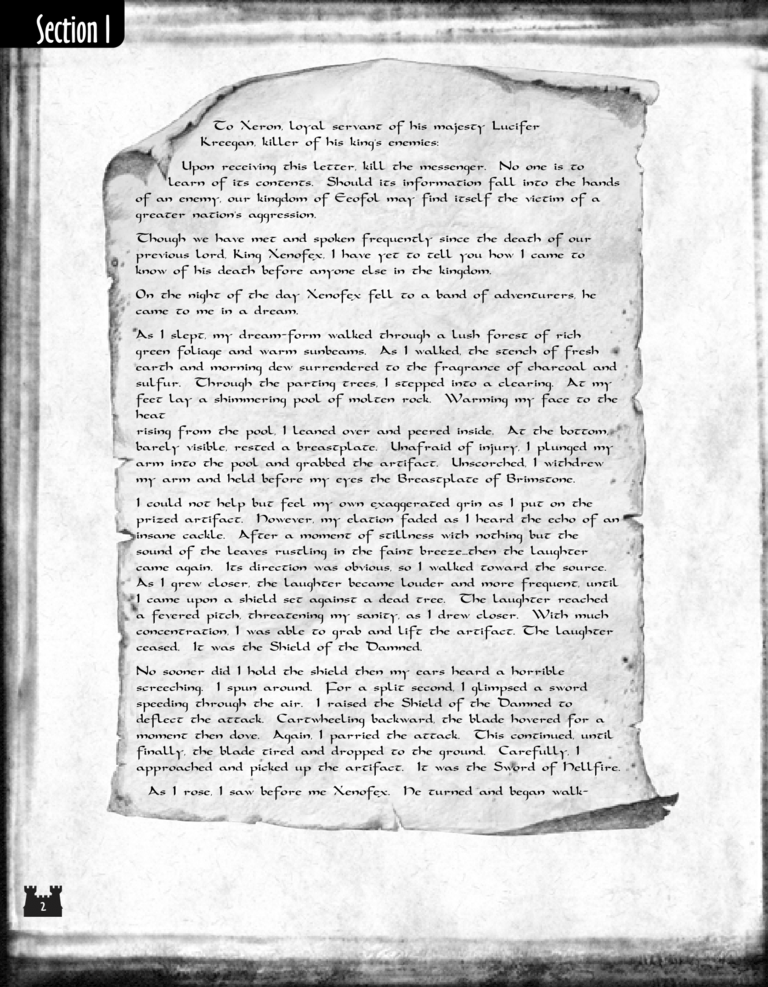 To Xeron, loyal servant of his majesty Lucifer

Kreegan, killer of his king's enemies:

Upon receiving this letter, kill the messenger. No one is to

learn of its contents. Should its information fall into the hands

of an enemy, our kingdom of Eeofol may find itself the victim of a

previous lord, King Xenofex, I have yet to tell you how I came to

know of his death before anyone else in the kingdom.

On the night of the day Xenofex fell to a band of adventurers, he

came to me in a dream.

As I slept, my dream-form walked through a lush forest of rich

green foliage and warm sunbeams. As I walked, the stench of fresh

earth and morning dew surrendered to the fragrance of charcoal and

sulfur. Through the parting trees, I stepped into a clearing. At my

feet lay a shimmering pool of molten rock. Warming my face to the

rising from the pool, I leaned over and peered inside. At the bottom,

barely visible, rested a breastplate. Unafraid of injury, I plunged my

arm into the pool and grabbed the artifact. Unscorched, I withdrew

my arm and held before my eyes the Breastplate of Brimstone.

prized artifact. However, my elation faded as I heard the echo of an

insane cackle. After a moment of stillness with nothing but the

sound of the leaves rustling in the faint breeze ... then the laughter

came again. Its direction was obvious, so I walked toward the source.

As I grew closer, the laughter became louder and more frequent, until

I came upon a shield set against a dead tree. The laughter reached

a fevered pitch, threatening my sanity, as I drew closer. With much

concentration, I was able to grab and lift the artifact. The laughter

ceased. It was the Shield of the Damned.

screeching. I spun around. For a split second, I glimpsed a sword

speeding through the air. I raised the Shield of the Damned to

deflect the attack. Cartwheeling backward, the blade hovered for a

moment then dove. Again, I parried the attack. This continued, until

finally, the blade tired and dropped to the ground. Carefully, I

approached and picked up the artifact. It was the Sword of Hellfire.

As I rose, I saw before me Xenofex. He turned and began walking