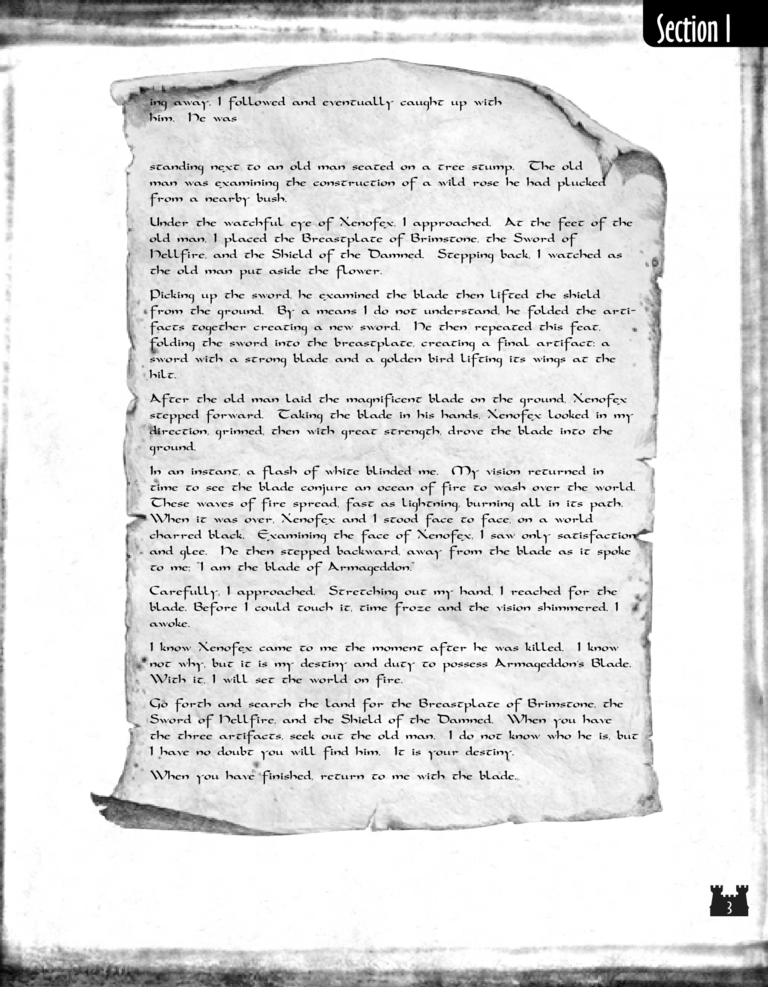 away. I followed and eventually caught up with

standing next to an old man seated on a tree stump. The old

from a nearby bush.

Under the watchful eye of Xenofex, I approached. At the feet of the

old man, I placed the Breastplate of Brimstone, the Sword of

Hellfire, and the Shield of the Damned. Stepping back, I watched as

the old man put aside the flower.

Picking up the sword, he examined the blade then lifted the shield

from the ground. By a means I do not understand, he folded the artifacts together creating a new sword. He then repeated this feat,

folding the sword into the breastplate, creating a final artifact: a

After the old man laid the magnificent blade on the ground, Xenofex

stepped forward. Taking the blade in his hands, Xenofex looked in my

direction, grinned, then with great strength, drove the blade into the

In an instant, a flash of white blinded me. My vision returned in

time to see the blade conjure an ocean of fire to wash over the world.

These waves of fire spread, fast as lightning, burning all in its path.

When it was over, Xenofex and I stood face to face, on a world

charred black. Examining the face of Xenofex, I saw only satisfaction

and glee. He then stepped backward, away from the blade as it spoke

to me; "I am the blade of Armageddon."

Carefully, I approached. Stretching out my hand, I reached for the

blade. Before I could touch it, time froze and the vision shimmered. I

I know Xenofex came to me the moment after he was killed. I know

not why, but it is my destiny and duty to possess Armageddon's Blade.

With it, I will set the world on fire.

and search the land for the Breastplate of Brimstone, the

Hellfire, and the Shield of the Damned. When you have

artifacts, seek out the old man. I do not know who he is, but

doubt you will find him. It is your destiny.

When you have finished, return to me with the blade.