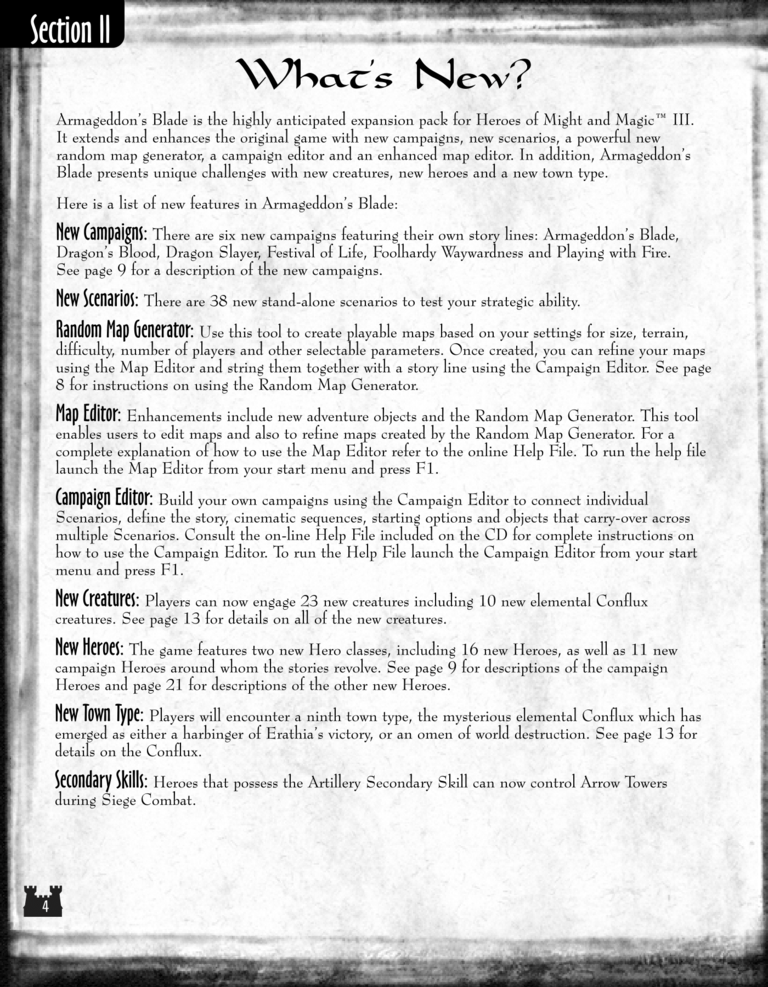 Armageddon's Blade is the highly anticipated expansion pack for Heroes of Might and Magic III.

It extends and enhances the original game with new campaigns, new scenarios, a powerful new

Here is a list of new features in Armageddon's Blade:

New Campaigns: There are six new campaigns featuring their own storylines: Armageddon's Blade,

See page 9 for a description of the new campaigns.

New Scenarios: There are 38 new stand-alone scenarios to test your strategic ability.

Random Map Generator: Use this tool to create playable maps based on your settings for size, terrain,

difficulty, number of players and other selectable parameters. Once created, you can refine your maps

using the Map Editor and string them together with a story line using the Campaign Editor. See page

8 for instructions on using the Random Map Generator.

enables users to edit maps and also to refine maps created by the Random Map Generator. For a

complete explanation of how to use the Map Editor refer to the online Help File. To run the help file

launch the Map Editor from your start menu and press F1.

Scenarios, define the story, cinematic sequences, starting options and objects that carry-over across

multiple Scenarios. Consult the on-line Help File included on the CD for complete instructions on

creatures. See page 13 for details on all of the new creatures.

campaign Heroes around whom the stories revolve. See page 9 for descriptions of the campaign

Heroes and page 21 for descriptions of the other new Heroes.

New Town Type: Players will encounter a ninth town type, the mysterious elemental Conflux which has

emerged as either a harbinger of Erathia's victory, or an omen of world destruction. See page 13 for

details on the Conflux.