Difference between revisions of "Conflux" 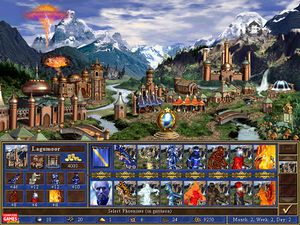 The conflux town and units

The Conflux is a neutral alignment town with a focus on magic and magic-related units.

Only available in the Armageddon's Blade expansion.

The Conflux is the home of Elementalists and Planeswalkers. Most of its units are Elementals.

This article has been marked for deletion.
Reason: unused

The following Elementalists are the magic heroes of the Conflux town:

The following Planeswalkers are the might heroes of the Conflux town:

WARNING! This town is often considered too strong and thus is banned in many multiplayer games/tournaments.