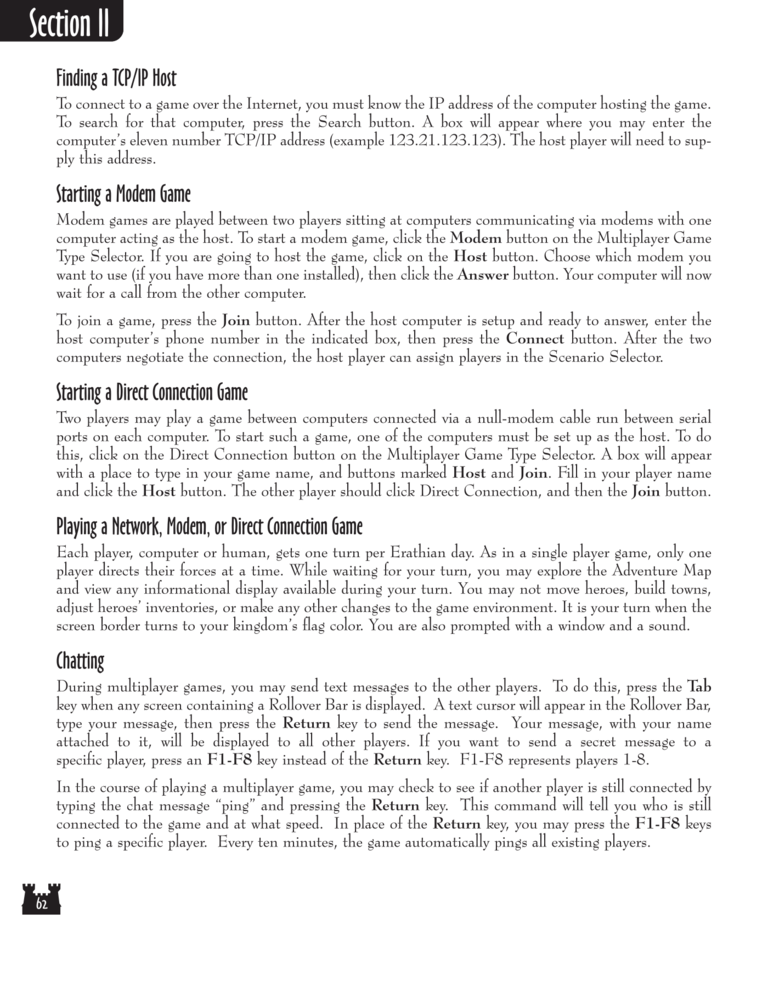 To connect to a game over the Internet, you must know the IP address of the computer hosting the game.

To search for that computer, press the Search button. A box will appear where you may enter the

computer acting as the host. To start a modem game, click the Modem button on the Multiplayer Game

Type Selector. If you are going to host the game, click on the Host button. Choose which modem you

want to use (if you have more than one installed), then click the Answer button. Your computer will now

wait for a call from the other computer.

To join a game, press the Join button. After the host computer is setup and ready to answer, enter the

host computer's phone number in the indicated box, then press the Connect button. After the two

computers negotiate the connection, the host player can assign players in the Scenario Selector.

ports on each computer. To start such a game, one of the computers must be set up as the host. To do

this, click on the Direct Connection button on the Multiplayer Game Type Selector. A box will appear

with a place to type in your game name, and buttons marked Host and Join. Fill in your player name

and click the Host button. The other player should click Direct Connection, and then the Join button.

Each player, computer or human, gets one turn per Erathian day. As in a single player game, only one

player directs their forces at a time. While waiting for your turn, you may explore the Adventure Map

and view any informational display available during your turn. You may not move heroes, build towns,

adjust heroes' inventories, or make any other changes to the game environment. It is your turn when the

screen border turns to your kingdom's flag color. You are also prompted with a window and a sound.

During multiplayer games, you may send text messages to the other players. To do this, press the Tab

key when any screen containing a Rollover Bar is displayed. A text cursor will appear in the Rollover Bar,

type your message, then press the Return key to send the message. Your message, with your name

attached to it, will be displayed to all other players. If you want to send a secret message to a

In the course of playing a multiplayer game, you may check to see if another player is still connected by

typing the chat message "ping" and pressing the Return key. This command will tell you who is still

connected to the game and at what speed. In place of the Return key, you may press the F1-F8 keys

to ping a specific player. Every ten minutes, the game automatically pings all existing players.