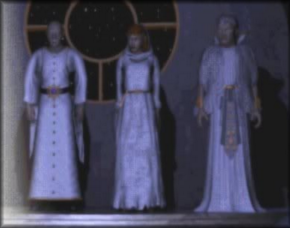 Ancestors were the biological start of the current crop of heroes. Ancients were often other powers who dabbled in the lives of mortals. The Ancestors are super powerful humans who have become legends to their descendants. Many people can view their ancestors as god-like, having done something truly heroic. Those are what the Ancestors were - people who went above and beyond with extraordinary skill and talent to do great things. They had never been written into the Might & Magic Universe before the Heroes Chronicles. These "Gods" were more powerful than the Ancients. The Ancestors where the guardians of the gates to Paradise, they decided who will go to the Paradise and who will be cast into Oblivion.