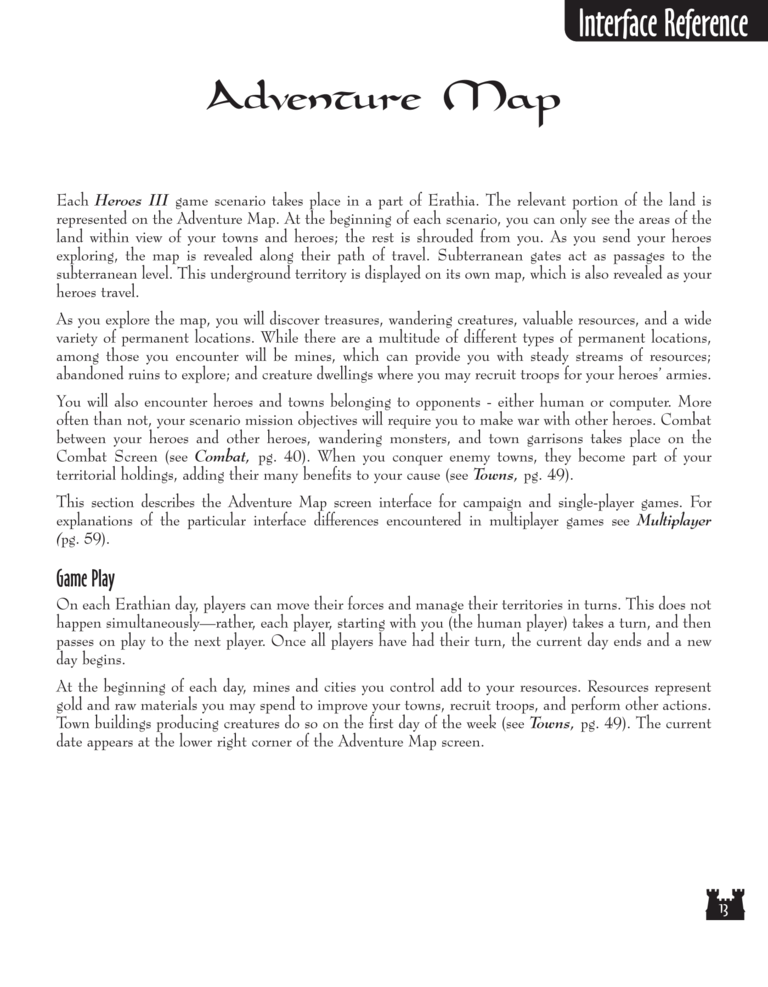 Each Heroes III game scenario takes place in a part of Erathia. The relevant portion of the land is

represented on the Adventure Map. At the beginning of each scenario, you can only see the areas of the

land within view of your towns and heroes; the rest is shrouded from you. As you send your heroes

exploring, the map is revealed along their path of travel. Subterranean gates act as passages to the

subterranean level. This underground territory is displayed on its own map, which is also revealed as your

As you explore the map, you will discover treasures, wandering creatures, valuable resources, and a wide

among those you encounter will be mines, which can provide you with steady streams of resources;

abandoned ruins to explore; and creature dwellings where you may recruit troops for your heroes' armies.

You will also encounter heroes and towns belonging to opponents - either human or computer. More

often than not, your scenario mission objectives will require you to make war with other heroes. Combat

between your heroes and other heroes, wandering monsters, and town garrisons takes place on the

Combat Screen (see Combat, pg. 40). When you conquer enemy towns, they become part of your

territorial holdings, adding their many benefits to your cause (see Towns, pg. 49).

This section describes the Adventure Map screen interface for campaign and single-player games. For

On each Erathian day, players can move their forces and manage their territories in turns. This does not

happen simultaneously — rather, each player, starting with you (the human player) takes a turn, and then

passes on play to the next player. Once all players have had their turn, the current day ends and a new

At the beginning of each day, mines and cities you control add to your resources. Resources represent

gold and raw materials you may spend to improve your towns, recruit troops, and perform other actions.

Town buildings producing creatures do so on the first day of the week (see Towns, pg. 49). The current

date appears at the lower right corner of the Adventure Map screen.