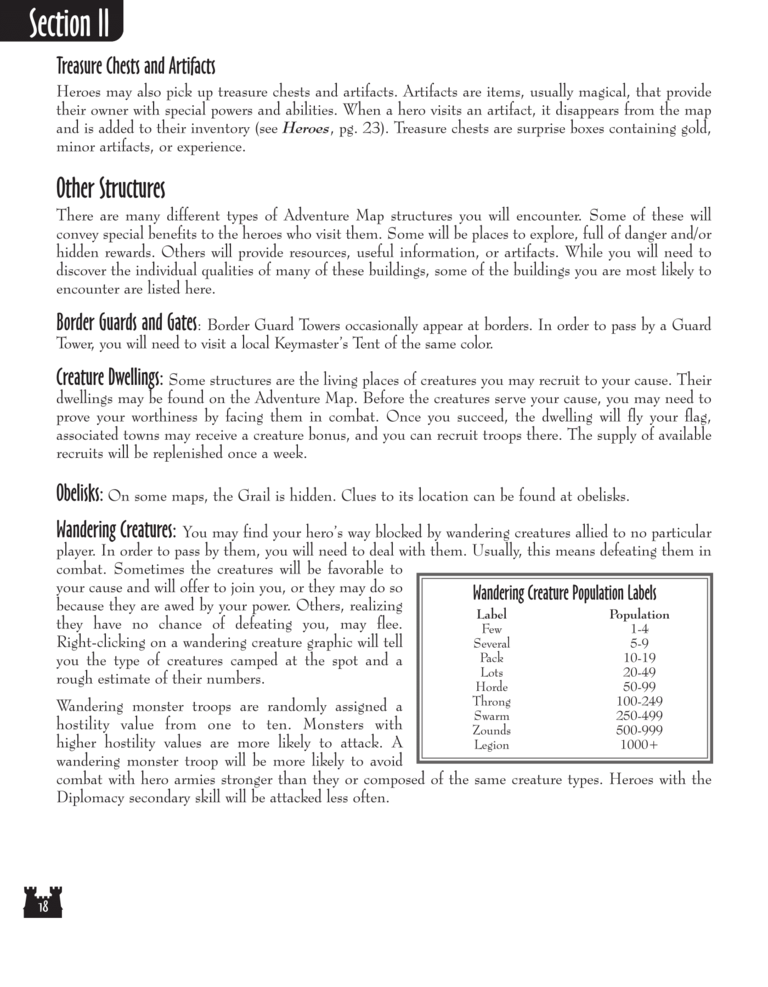 Heroes may also pick up treasure chests and artifacts. Artifacts are items, usually magical, that provide

their owner with special powers and abilities. When a hero visits an artifact, it disappears from the map

and is added to their inventory (see Heroes, pg. 23). Treasure chests are surprise boxes containing gold,

There are many different types of Adventure Map structures you will encounter. Some of these will

convey special benefits to the heroes who visit them. Some will be places to explore, full of danger and/or

hidden rewards. Others will provide resources, useful information, or artifacts. While you will need to

discover the individual qualities of many of these buildings, some of the buildings you are most likely to

Border Guards and Gates: Border Guard Towers occasionally appear at borders. In order to pass by a Guard

Tower, you will need to visit a local Keymaster's Tent of the same color.

Creature Dwellings: Some structures are the living places of creatures you may recruit to your cause. Their

dwellings may be found on the Adventure Map. Before the creatures serve your cause, you may need to

prove your worthiness by facing them in combat. Once you succeed, the dwelling will fly your flag,

associated towns may receive a creature bonus, and you can recruit troops there. The supply of available

recruits will be replenished once a week.

Obelisks: On some maps, the Grail is hidden. Clues to its location can be found at obelisks.

Wandering Creatures: You may find your hero's way blocked by wandering creatures allied to no particular

player. In order to pass by them, you will need to deal with them. Usually, this means defeating them in

combat. Sometimes the creatures will be favorable to

your cause and will offer to join you, or they may do so

because they are awed by your power. Others, realizing

they have no chance of defeating you, may flee.

Right-clicking on a wandering creature graphic will tell

you the type of creatures camped at the spot and a

rough estimate of their numbers.

hostility value from one to ten. Monsters with

higher hostility values are more likely to attack. A

wandering monster troop will be more likely to avoid

combat with hero armies stronger than they or composed of the same creature types. Heroes with the