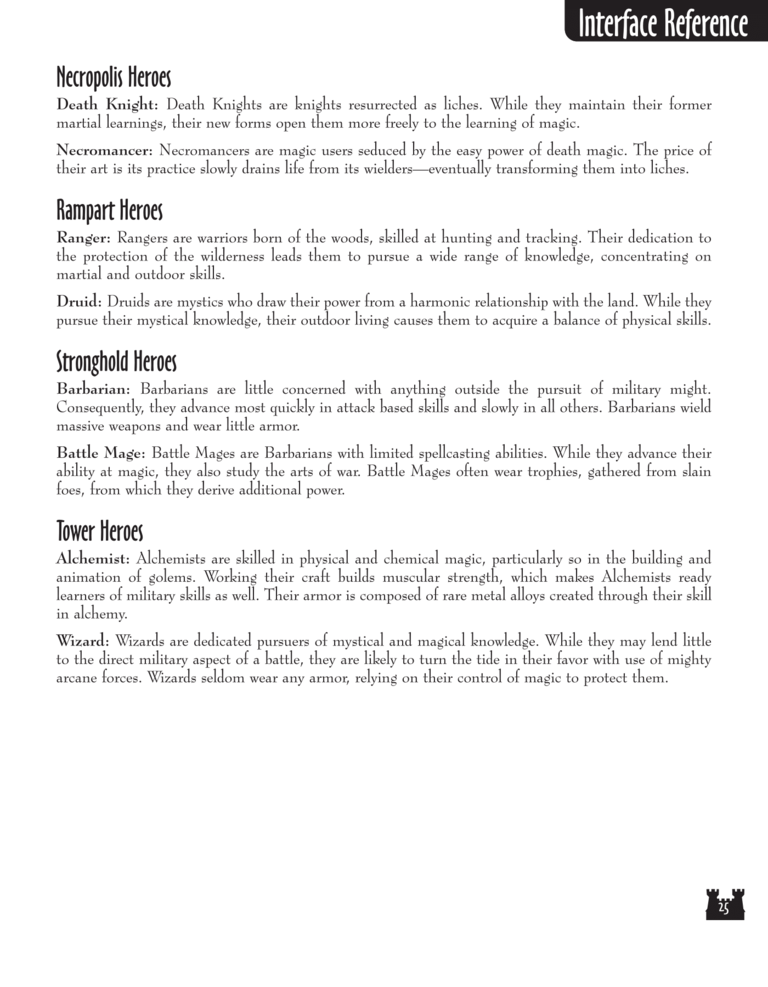 Death Knight: Death Knights are knights resurrected as liches. While they maintain their former

martial learnings, their new forms open them more freely to the learning of magic.

Necromancer: Necromancers are magic users seduced by the easy power of death magic. The price of

their art is its practice slowly drains life from its wielders — eventually transforming them into liches.

Ranger: Rangers are warriors born of the woods, skilled at hunting and tracking. Their dedication to

the protection of the wilderness leads them to pursue a wide range of knowledge, concentrating on

Druid: Druids are mystics who draw their power from a harmonic relationship with the land. While they

pursue their mystical knowledge, their outdoor living causes them to acquire a balance of physical skills.

Barbarian: Barbarians are little concerned with anything outside the pursuit of military might.

Consequently, they advance most quickly in attack based skills and slowly in all others. Barbarians wield

Battle Mage: Battle Mages are Barbarians with limited spellcasting abilities. While they advance their

foes, from which they derive additional power.

Alchemist: Alchemists are skilled in physical and chemical magic, particularly so in the building and

learners of military skills as well. Their armor is composed of rare metal alloys created through their skill

Wizard: Wizards are dedicated pursuers of mystical and magical knowledge. While they may lend little

to the direct military aspect of a battle, they are likely to turn the tide in their favor with use of mighty

arcane forces. Wizards seldom wear any armor, relying on their control of magic to protect them.