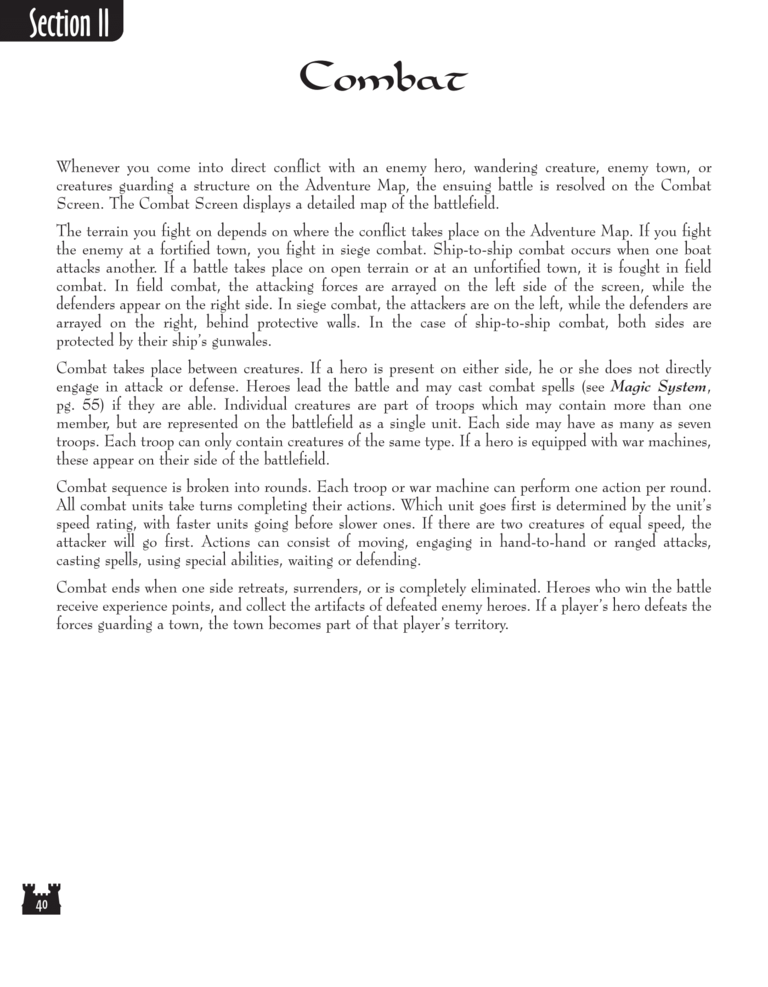 Whenever you come into direct conflict with an enemy hero, wandering creature, enemy town, or

creatures guarding a structure on the Adventure Map, the ensuing battle is resolved on the Combat

Screen. The Combat Screen displays a detailed map of the battlefield.

The terrain you fight on depends on where the conflict takes place on the Adventure Map. If you fight

the enemy at a fortified town, you fight in siege combat. Ship-to-ship combat occurs when one boat

attacks another. If a battle takes place on open terrain or at an unfortified town, it is fought in field

combat. In field combat, the attacking forces are arrayed on the left side of the screen, while the

defenders appear on the right side. In siege combat, the attackers are on the left, while the defenders are

arrayed on the right, behind protective walls. In the case of ship-to-ship combat, both sides are

protected by their ship's gunwales.

Combat takes place between creatures. If a hero is present on either side, he or she does not directly

pg. 55) if they are able. Individual creatures are part of troops which may contain more than one

member, but are represented on the battlefield as a single unit. Each side may have as many as seven

troops. Each troop can only contain creatures of the same type. If a hero is equipped with war machines,

these appear on their side of the battlefield.

Combat sequence is broken into rounds. Each troop or war machine can perform one action per round.

All combat units take turns completing their actions. Which unit goes first is determined by the unit's

speed rating, with faster units going before slower ones. If there are two creatures of equal speed, the

attacker will go first. Actions can consist of moving, engaging in hand-to-hand or ranged attacks,

Combat ends when one side retreats, surrenders, or is completely eliminated. Heroes who win the battle

receive experience points, and collect the artifacts of defeated enemy heroes. If a player's hero defeats the

forces guarding a town, the town becomes part of that player's territory.