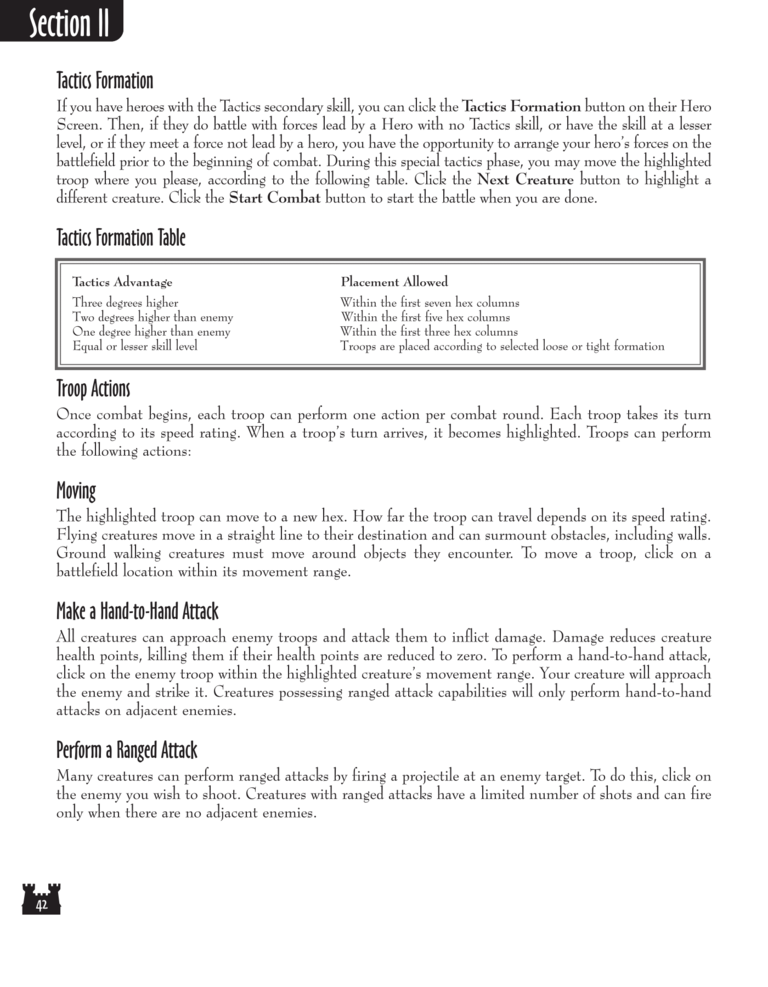 If you have heroes with the Tactics secondary skill, you can click the Tactics Formation button on their Hero

Screen. Then, if they do battle with forces lead by a Hero with no Tactics skill, or have the skill at a lesser

level, or if they meet a force not lead by a hero, you have the opportunity to arrange your hero's forces on the

battlefield prior to the beginning of combat. During this special tactics phase, you may move the highlighted

troop where you please, according to the following table. Click the Next Creature button to highlight a

different creature. Click the Start Combat button to start the battle when you are done.

One degree higher than enemy

Within the first seven hex columns

Within the first five hex columns

Within the first three hex columns

Troops are placed according to selected loose or tight formation

Once combat begins, each troop can perform one action per combat round. Each troop takes its turn

according to its speed rating. When a troop's turn arrives, it becomes highlighted. Troops can perform

The highlighted troop can move to a new hex. How far the troop can travel depends on its speed rating.

Flying creatures move in a straight line to their destination and can surmount obstacles, including walls.

Ground walking creatures must move around objects they encounter. To move a troop, click on a

battlefield location within its movement range.

All creatures can approach enemy troops and attack them to inflict damage. Damage reduces creature

health points, killing them if their health points are reduced to zero. To perform a hand-to-hand attack,

click on the enemy troop within the highlighted creature's movement range. Your creature will approach

the enemy and strike it. Creatures possessing ranged attack capabilities will only perform hand-to-hand

Many creatures can perform ranged attacks by firing a projectile at an enemy target. To do this, click on

the enemy you wish to shoot. Creatures with ranged attacks have a limited number of shots and can fire

only when there are no adjacent enemies.