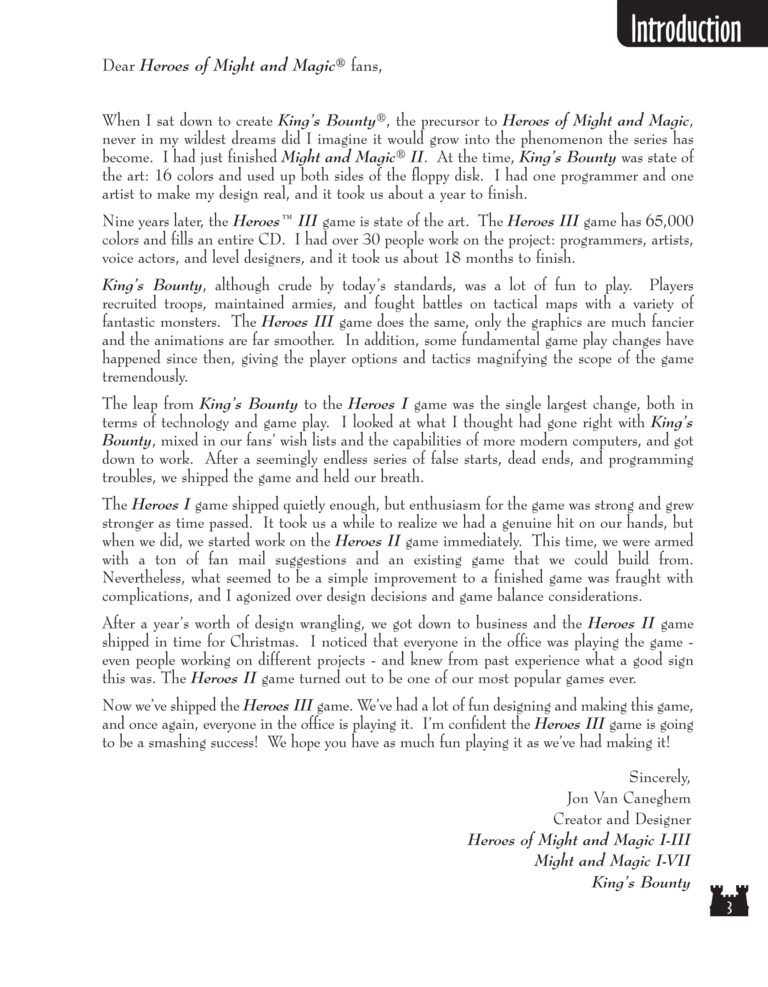 When I sat down to create King's Bounty, the precursor to Heroes of Might and Magic,

become. I had just finished Might and Magic II. At the time, King's Bounty was state of

the art: 16 colors and used up both sides of the floppy disk. I had one programmer and one

artist to make my design real, and it took us about a year to finish.

colors and fills an entire CD. I had over 30 people work on the project: programmers, artists,

voice actors, and level designers, and it took us about 18 months to finish.

King's Bounty, although crude by today's standards, was a lot of fun to play. Players

recruited troops, maintained armies, and fought battles on tactical maps with a variety of

fantastic monsters. The Heroes III game does the same, only the graphics are much fancier

and the animations are far smoother. In addition, some fundamental game play changes have

happened since then, giving the player options and tactics magnifying the scope of the game

The leap from King's Bounty to the Heroes I game was the single largest change, both in

terms of technology and game play. I looked at what I thought had gone right with King's

Bounty, mixed in our fans' wish lists and the capabilities of more modern computers, and got

down to work. After a seemingly endless series of false starts, dead ends, and programming

troubles, we shipped the game and held our breath.

The Heroes I game shipped quietly enough, but enthusiasm for the game was strong and grew

stronger as time passed. It took us a while to realize we had a genuine hit on our hands, but

when we did, we started work on the Heroes II game immediately. This time, we were armed

with a ton of fan mail suggestions and an existing game that we could build from.

Nevertheless, what seemed to be a simple improvement to a finished game was fraught with

complications, and I agonized over design decisions and game balance considerations.

After a year's worth of design wrangling, we got down to business and the Heroes II game

shipped in time for Christmas. I noticed that everyone in the office was playing the game -

this was. The Heroes II game turned out to be one of our most popular games ever.

Now we've shipped the Heroes III game. We've had a lot of fun designing and making this game,

and once again, everyone in the office is playing it. I'm confident the Heroes III game is going

to be a smashing success! We hope you have as much fun playing it as we've had making it!