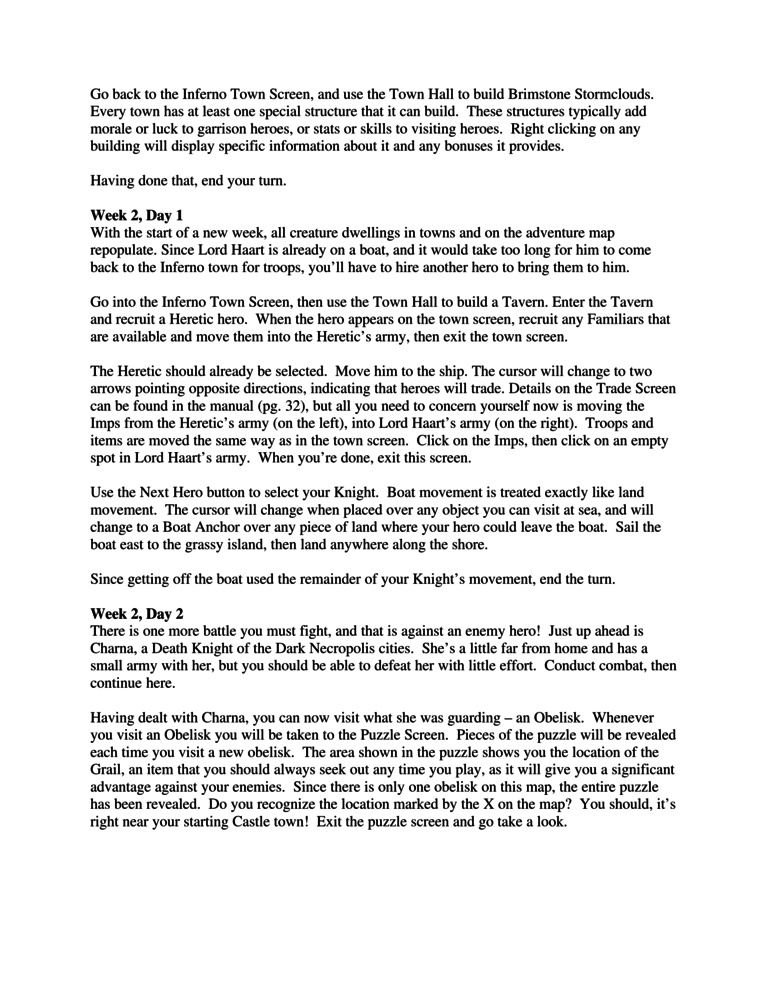 Go back to the Inferno Town Screen, and use the Town Hall to build Brimstone Stormclouds.

Every town has at least one special structure that it can build. These structures typically add

morale or luck to garrison heroes, or stats or skills to visiting heroes. Right clicking on any

building will display specific information about it and any bonuses it provides.

Having done that, end your turn.

With the start of a new week, all creature dwellings in towns and on the adventure map

repopulate. Since Lord Haart is already on a boat, and it would take too long for him to come

back to the Inferno town for troops, you’ll have to hire another hero to bring them to him.

Go into the Inferno Town Screen, then use the Town Hall to build a Tavern. Enter the Tavern

and recruit a Heretic hero. When the hero appears on the town screen, recruit any Familiars that

are available and move them into the Heretic’s army, then exit the town screen.

The Heretic should already be selected. Move him to the ship. The cursor will change to two

arrows pointing opposite directions, indicating that heroes will trade. Details on the Trade Screen

can be found in the manual (pg. 32), but all you need to concern yourself now is moving the

items are moved the same way as in the town screen. Click on the Imps, then click on an empty

Use the Next Hero button to select your Knight. Boat movement is treated exactly like land

movement. The cursor will change when placed over any object you can visit at sea, and will

change to a Boat Anchor over any piece of land where your hero could leave the boat. Sail the

boat east to the grassy island, then land anywhere along the shore.

Since getting off the boat used the remainder of your Knight’s movement, end the turn.

There is one more battle you must fight, and that is against an enemy hero! Just up ahead is

Charna, a Death Knight of the Dark Necropolis cities. She’s a little far from home and has a

small army with her, but you should be able to defeat her with little effort. Conduct combat, then

Having dealt with Charna, you can now visit what she was guarding – an Obelisk. Whenever

you visit an Obelisk you will be taken to the Puzzle Screen. Pieces of the puzzle will be revealed

each time you visit a new obelisk. The area shown in the puzzle shows you the location of the

Grail, an item that you should always seek out any time you play, as it will give you a significant

advantage against your enemies. Since there is only one obelisk on this map, the entire puzzle

has been revealed. Do you recognize the location marked by the X on the map? You should, it’s

right near your starting Castle town! Exit the puzzle screen and go take a look.