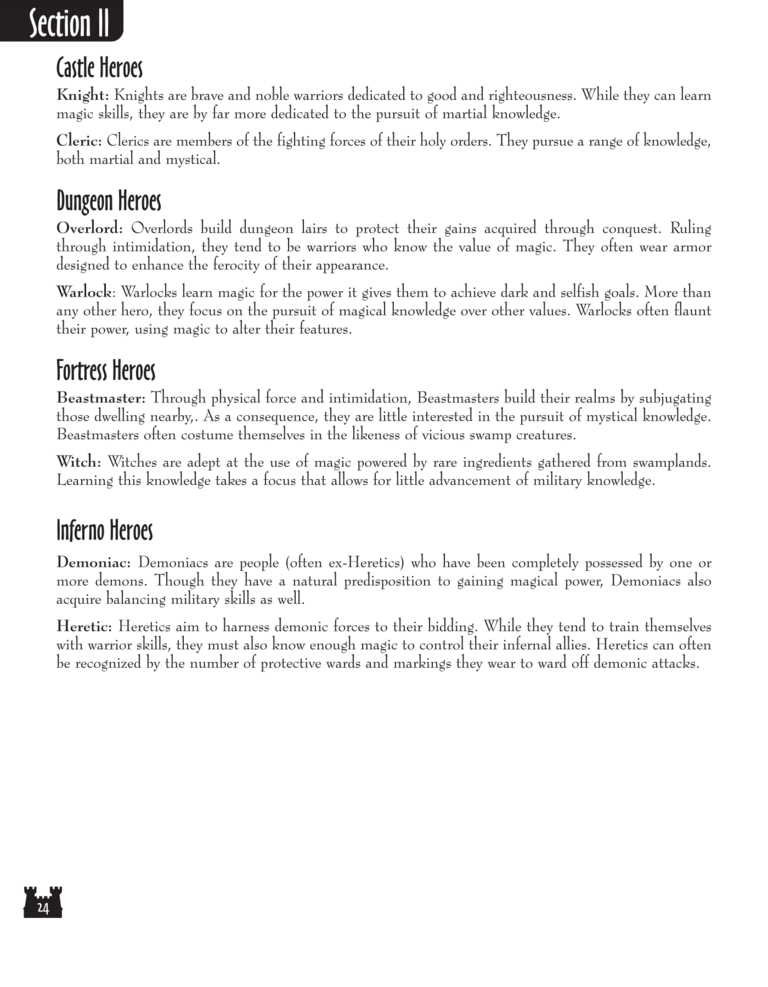 Knight: Knights are brave and noble warriors dedicated to good and righteousness. While they can learn

magic skills, they are by far more dedicated to the pursuit of martial knowledge.

Cleric: Clerics are members of the fighting forces of their holy orders. They pursue a range of knowledge,

both martial and mystical.

through intimidation, they tend to be warriors who know the value of magic. They often wear armor

designed to enhance the ferocity of their appearance.

Warlock: Warlocks learn magic for the power it gives them to achieve dark and selfish goals. More than

any other hero, they focus on the pursuit of magical knowledge over other values. Warlocks often flaunt

their power, using magic to alter their features.

Beastmaster: Through physical force and intimidation, Beastmasters build their realms by subjugating

those dwelling nearby,. As a consequence, they are little interested in the pursuit of mystical knowledge.

Beastmasters often costume themselves in the likeness of vicious swamp creatures.

Witch: Witches are adept at the use of magic powered by rare ingredients gathered from swamplands.

Learning this knowledge takes a focus that allows for little advancement of military knowledge.

Demoniac: Demoniacs are people (often ex-Heretics) who have been completely possessed by one or

more demons. Though they have a natural predisposition to gaining magical power, Demoniacs also

Heretic: Heretics aim to harness demonic forces to their bidding. While they tend to train themselves

with warrior skills, they must also know enough magic to control their infernal allies. Heretics can often

be recognized by the number of protective wards and markings they wear to ward off demonic attacks.