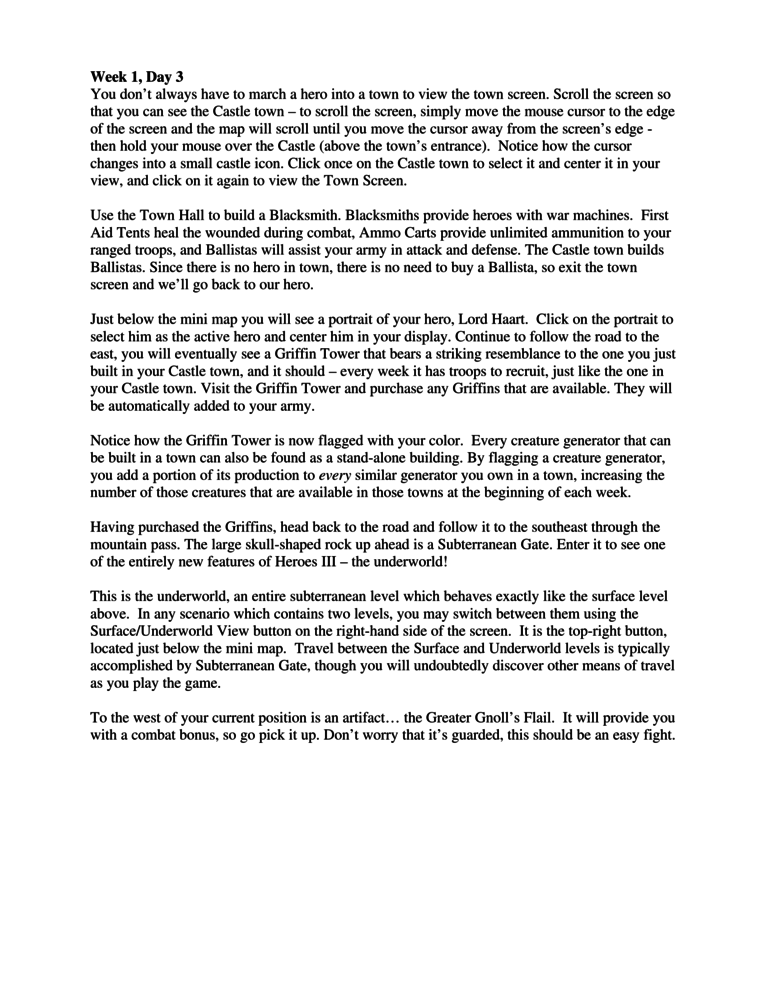 You don’t always have to march a hero into a town to view the town screen. Scroll the screen so

that you can see the Castle town – to scroll the screen, simply move the mouse cursor to the edge

of the screen and the map will scroll until you move the cursor away from the screen’s edge then hold your mouse over the Castle (above the town’s entrance). Notice how the cursor

changes into a small castle icon. Click once on the Castle town to select it and center it in your

view, and click on it again to view the Town Screen.

Use the Town Hall to build a Blacksmith. Blacksmiths provide heroes with war machines. First

ranged troops, and Ballistas will assist your army in attack and defense. The Castle town builds

Ballistas. Since there is no hero in town, there is no need to buy a Ballista, so exit the town

screen and we’ll go back to our hero.

Just below the mini map you will see a portrait of your hero, Lord Haart. Click on the portrait to

select him as the active hero and center him in your display. Continue to follow the road to the

east, you will eventually see a Griffin Tower that bears a striking resemblance to the one you just

built in your Castle town, and it should – every week it has troops to recruit, just like the one in

your Castle town. Visit the Griffin Tower and purchase any Griffins that are available. They will

be automatically added to your army.

Notice how the Griffin Tower is now flagged with your color. Every creature generator that can

be built in a town can also be found as a stand-alone building. By flagging a creature generator,

you add a portion of its production to every similar generator you own in a town, increasing the

number of those creatures that are available in those towns at the beginning of each week.

Having purchased the Griffins, head back to the road and follow it to the southeast through the

mountain pass. The large skull-shaped rock up ahead is a Subterranean Gate. Enter it to see one

of the entirely new features of Heroes III – the underworld!

This is the underworld, an entire subterranean level which behaves exactly like the surface level

above. In any scenario which contains two levels, you may switch between them using the

Surface/Underworld View button on the right-hand side of the screen. It is the top-right button,

located just below the mini map. Travel between the Surface and Underworld levels is typically

accomplished by Subterranean Gate, though you will undoubtedly discover other means of travel

as you play the game.

To the west of your current position is an artifact… the Greater Gnoll’s Flail. It will provide you

with a combat bonus, so go pick it up. Don’t worry that it’s guarded, this should be an easy fight.