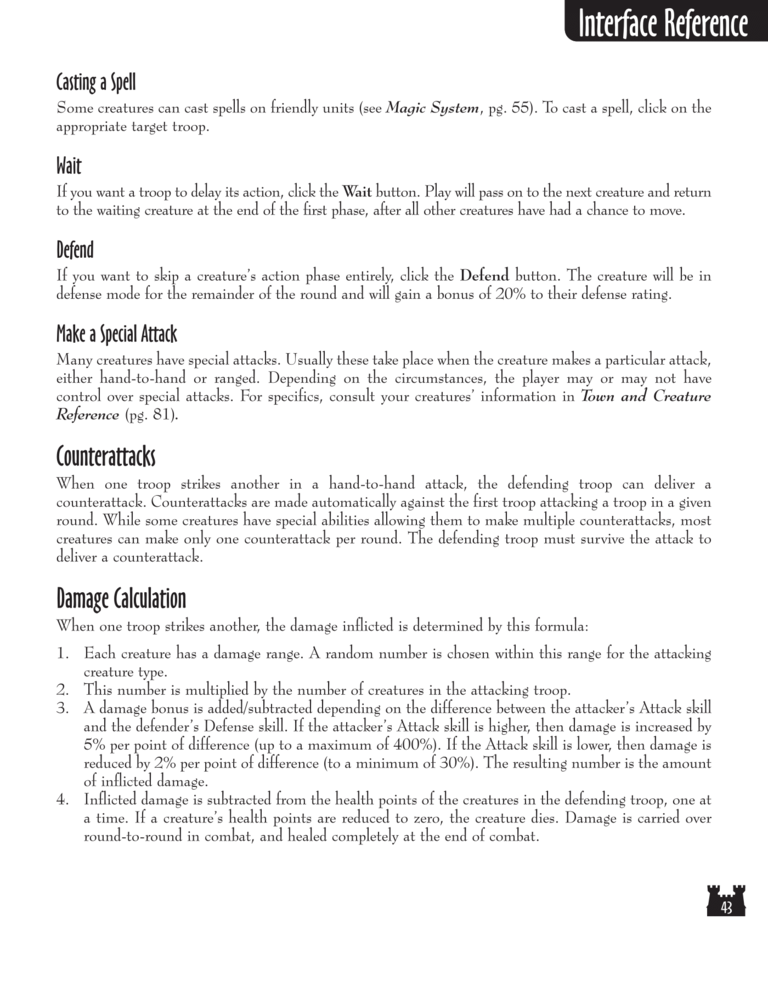 Some creatures can cast spells on friendly units (see Magic System, pg. 55). To cast a spell, click on the

If you want a troop to delay its action, click the Wait button. Play will pass on to the next creature and return

to the waiting creature at the end of the first phase, after all other creatures have had a chance to move.

If you want to skip a creature's action phase entirely, click the Defend button. The creature will be in

defense mode for the remainder of the round and will gain a bonus of 20% to their defense rating.

Many creatures have special attacks. Usually these take place when the creature makes a particular attack,

either hand-to-hand or ranged. Depending on the circumstances, the player may or may not have

control over special attacks. For specifics, consult your creatures' information in Town and Creature

When one troop strikes another in a hand-to-hand attack, the defending troop can deliver a

counterattack. Counterattacks are made automatically against the first troop attacking a troop in a given

round. While some creatures have special abilities allowing them to make multiple counterattacks, most

creatures can make only one counterattack per round. The defending troop must survive the attack to

When one troop strikes another, the damage inflicted is determined by this formula:

1. Each creature has a damage range. A random number is chosen within this range for the attacking

2. This number is multiplied by the number of creatures in the attacking troop.

3. A damage bonus is added/subtracted depending on the difference between the attacker's Attack skill

and the defender's Defense skill. If the attacker's Attack skill is higher, then damage is increased by

5% per point of difference (up to a maximum of 400%). If the Attack skill is lower, then damage is

reduced by 2% per point of difference (to a minimum of 30%). The resulting number is the amount

4. Inflicted damage is subtracted from the health points of the creatures in the defending troop, one at

a time. If a creature's health points are reduced to zero, the creature dies. Damage is carried over

round-to-round in combat, and healed completely at the end of combat.