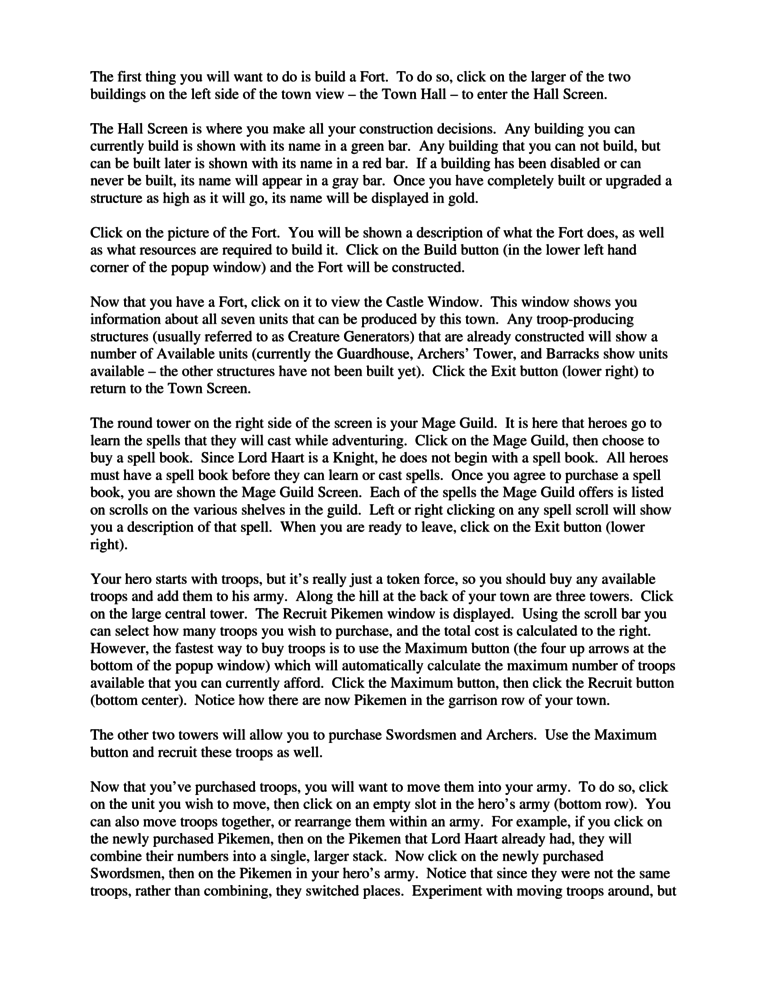 The first thing you will want to do is build a Fort. To do so, click on the larger of the two

buildings on the left side of the town view – the Town Hall – to enter the Hall Screen.

The Hall Screen is where you make all your construction decisions. Any building you can

currently build is shown with its name in a green bar. Any building that you can not build, but

can be built later is shown with its name in a red bar. If a building has been disabled or can

never be built, its name will appear in a gray bar. Once you have completely built or upgraded a

structure as high as it will go, its name will be displayed in gold.

Click on the picture of the Fort. You will be shown a description of what the Fort does, as well

as what resources are required to build it. Click on the Build button (in the lower left hand

corner of the popup window) and the Fort will be constructed.

Now that you have a Fort, click on it to view the Castle Window. This window shows you

information about all seven units that can be produced by this town. Any troop-producing

available – the other structures have not been built yet). Click the Exit button (lower right) to

return to the Town Screen.

The round tower on the right side of the screen is your Mage Guild. It is here that heroes go to

learn the spells that they will cast while adventuring. Click on the Mage Guild, then choose to

must have a spell book before they can learn or cast spells. Once you agree to purchase a spell

on scrolls on the various shelves in the guild. Left or right clicking on any spell scroll will show

you a description of that spell. When you are ready to leave, click on the Exit button (lower

Your hero starts with troops, but it’s really just a token force, so you should buy any available

troops and add them to his army. Along the hill at the back of your town are three towers. Click

on the large central tower. The Recruit Pikemen window is displayed. Using the scroll bar you

can select how many troops you wish to purchase, and the total cost is calculated to the right.

However, the fastest way to buy troops is to use the Maximum button (the four up arrows at the

(bottom center). Notice how there are now Pikemen in the garrison row of your town.

The other two towers will allow you to purchase Swordsmen and Archers. Use the Maximum

button and recruit these troops as well.

Now that you’ve purchased troops, you will want to move them into your army. To do so, click

on the unit you wish to move, then click on an empty slot in the hero’s army (bottom row). You

can also move troops together, or rearrange them within an army. For example, if you click on

the newly purchased Pikemen, then on the Pikemen that Lord Haart already had, they will

combine their numbers into a single, larger stack. Now click on the newly purchased

Swordsmen, then on the Pikemen in your hero’s army. Notice that since they were not the same

troops, rather than combining, they switched places. Experiment with moving troops around, but