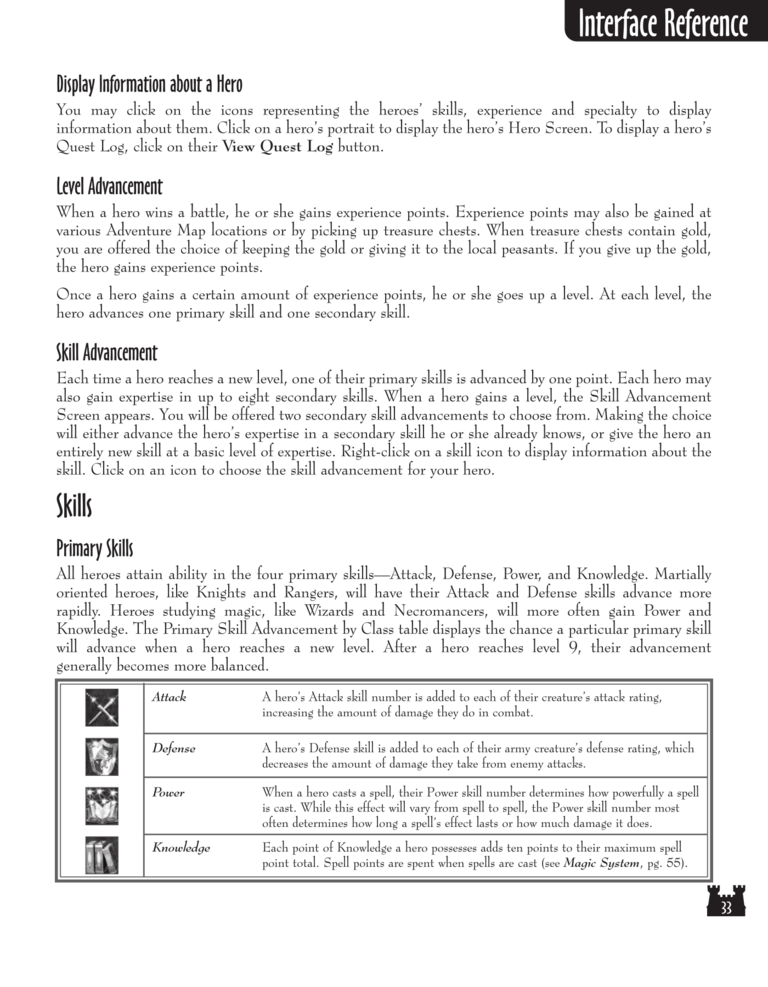 Display Information about a Hero

You may click on the icons representing the heroes' skills, experience and specialty to display

information about them. Click on a hero's portrait to display the hero's Hero Screen. To display a hero's

you are offered the choice of keeping the gold or giving it to the local peasants. If you give up the gold,

Once a hero gains a certain amount of experience points, he or she goes up a level. At each level, the

hero advances one primary skill and one secondary skill.

Each time a hero reaches a new level, one of their primary skills is advanced by one point. Each hero may

also gain expertise in up to eight secondary skills. When a hero gains a level, the Skill Advancement

Screen appears. You will be offered two secondary skill advancements to choose from. Making the choice

will either advance the hero's expertise in a secondary skill he or she already knows, or give the hero an

entirely new skill at a basic level of expertise. Right-click on a skill icon to display information about the

skill. Click on an icon to choose the skill advancement for your hero.

oriented heroes, like Knights and Rangers, will have their Attack and Defense skills advance more

A hero's Attack skill number is added to each of their creature's attack rating,

increasing the amount of damage they do in combat.

A hero's Defense skill is added to each of their army creature's defense rating, which

decreases the amount of damage they take from enemy attacks.

When a hero casts a spell, their Power skill number determines how powerfully a spell

is cast. While this effect will vary from spell to spell, the Power skill number most

often determines how long a spell's effect lasts or how much damage it does.