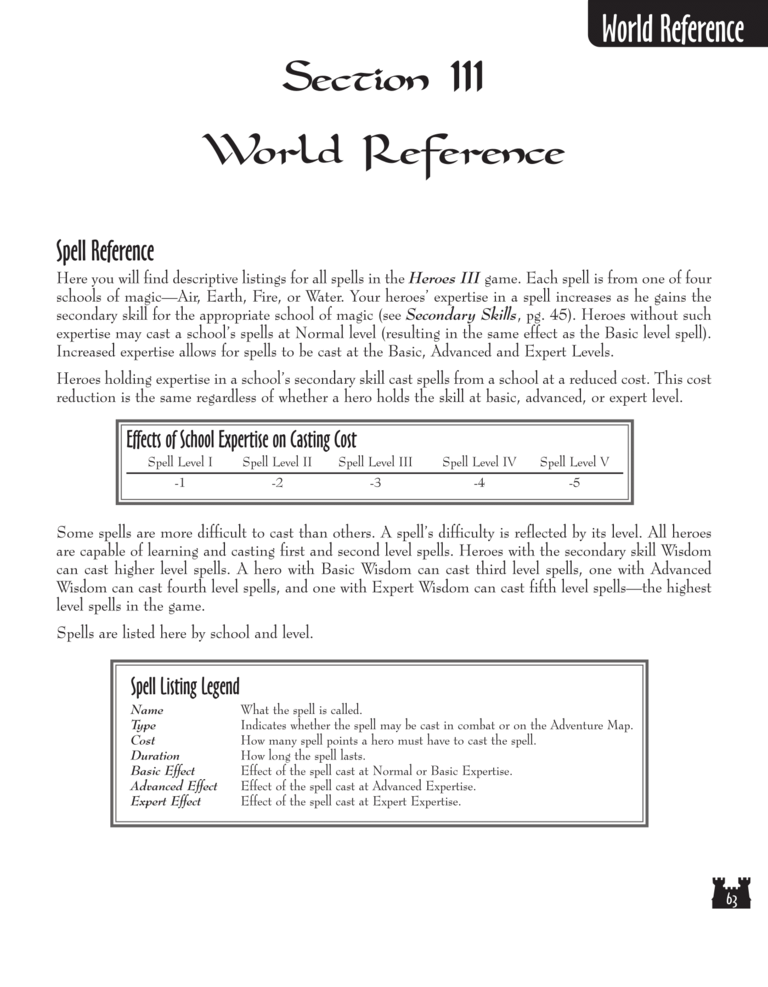 Here you will find descriptive listings for all spells in the Heroes III game. Each spell is from one of four

schools of magic — Air, Earth, Fire, or Water. Your heroes' expertise in a spell increases as he gains the

secondary skill for the appropriate school of magic (see Secondary Skills, pg. 45). Heroes without such

expertise may cast a school's spells at Normal level (resulting in the same effect as the Basic level spell).

Increased expertise allows for spells to be cast at the Basic, Advanced and Expert Levels.

Heroes holding expertise in a school's secondary skill cast spells from a school at a reduced cost. This cost

reduction is the same regardless of whether a hero holds the skill at basic, advanced, or expert level.

Some spells are more difficult to cast than others. A spell's difficulty is reflected by its level. All heroes

are capable of learning and casting first and second level spells. Heroes with the secondary skill Wisdom

can cast higher level spells. A hero with Basic Wisdom can cast third level spells, one with Advanced

level spells in the game.

Spells are listed here by school and level.

What the spell is called.

Indicates whether the spell may be cast in combat or on the Adventure Map.

How many spell points a hero must have to cast the spell.

How long the spell lasts.

Effect of the spell cast at Normal or Basic Expertise.

Effect of the spell cast at Advanced Expertise.

Effect of the spell cast at Expert Expertise.