Duke Winston Boragus, leader of Krewlod, has offered you a mercenary contract which will require you to make a series of raids into Erathian territory. The plan is to plunder enough gold to allow the armies of Krewlod to purchase what it would need for... other things. 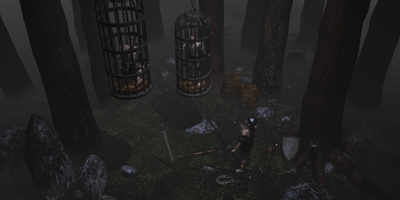 Your abilities have been brought to the attention of the barbarian nation of Krewlod. Their skirmishes with the Erathian military on their eastern border are legendary. Many credit them for hardening Erathian soldiers. Recently, a border raid resulted in victory, and uncharacteristically, a large numbers of prisoners. Upon interrogation, their suspicions were confirmed. Without King Gryphonheart, Erathia has lost its soul. Your goal is to quickly plunder the Erathian land within Krewlod’s immediate reach. Once they have the resources they need... war will be discussed. Until then, your independent participation is needed. Should you be captured, Krewlod will claim you were an over zealous clan leader, acting outside the interests of the nation.

To win, you must accumulate 200,000 gold. Your Heroes will be limited to 12th level in this scenario, but your 8 strongest Heroes will be available to you in the final scenario of this campaign.