Their End of the Bargain

The natives where so happy at Sir Christian's success, they completely forgot about the agreement to help him in return. The days and days of celebration turned into weeks of endless parties leaving Sir Christian very angry. While the natives were celebrating he traveled to the tavern and met with the former leaders of the towns he'd just beaten. The leaders come to the conclusion Sir Christian was too dangerous to have around. The bargain was struck and Sir Christian would gain their lands and they would gladly help him to leave. 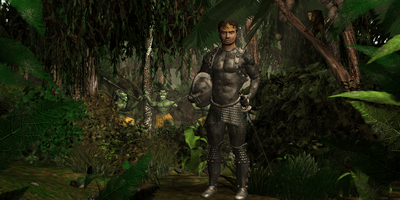 Christian : I swear... these natives only know two things: how to start a war and how to throw a party. Apparantly, the natives I just defeated want me off the island as much as I want off. One condition, I must reclaim the lands I just took from them. Ugh. The stench.

To win, Sir Christian must defeat all the enemies. He now has an allied town, which lies, in the northwestern region. He is limited to level 16 in this scenario, but he will carry over his skills, spells, secondary skills and experience to the next scenario.