Third scenario of the Specter of Power campaign.

The Kreegans do not believe your sincerity. To them, Necromancers are weak wraiths feeding off the living, unable to initiate any good plan. To prove your sincerity they want you to turn over the Eversmoking Ring of Sulfur. A Druid stole it some years ago and they want it back. 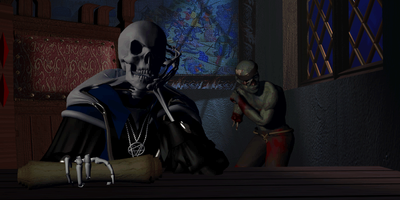 Sandro : Kreegans are so arrogant, but I have need of their creatures to invade Erathia and crush her military. Without their brute strength I would not be able to carry out all my plans. So I will play their little game and find their precious artifact, the Eversmoking Ring of Sulfur.

Obtain the Eversmoking Ring of Sulfur for the Kreegans to win the scenario. However, if Sandro is defeated in combat, the scenario is lost. Heroes are limited to level 24, but Sandro and three of his lieutenants will carry their experience, skills and spells on to the next scenario.