This part of Avauntnell was once home to wandering tribes of barbarians, but of late the lush grassland and forests (with only a few swamps) have attracted settlers. These settlers, needing to fend off the occasional barbarian raid and bandit strike, have started their own offshoot of the Erathian militia. Any non-Erathian who enters this region should beware. 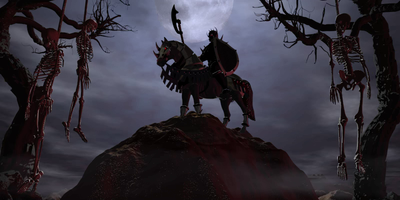 Crag Hack : I went back to the Tavern to give Sandro this ugly Helmet he wanted. Now he wants me to get some kind of sword from a Death Knight. That tin plated corpse is hiding out in a swamp, so I have to trudge through miles of muck before I get a chance to hack the sword out of his cold dead hands!

Seize the Blackshard of the Dead Knight from Marzeth to win the scenario. However, if Crag Hack is defeated in combat, the scenario is lost. Crag Hack is limited to level 15 but will carry his experience, skills and spells on to the next scenario.