We now know how Erathia fell to Nighon and Eeofol. They literally tunneled their way under the Nighon Straits, breaking into the Dwarven Tunnels along Erathia's coast. We must now force them to use the tunnels again - this time as an escape route as we drive them from Erathia's lands forever! 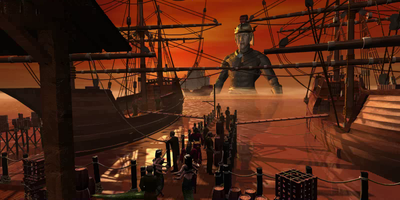 Catherine : We now know how Erathia fell to Nighon and Eeofol. Through an extensive network of underground tunnels dug by the Overlord’s armies, they struck simultaneously in many areas with overwhelming numbers. Credit the military for holding the invasion to half the country. We have discovered the main artery for transporting forces from Nighon to Erathia; it is under the ocean, connecting the Nighon underworld to the Erathian mainland. Bracada and Avlee have sent armies to join the fight. First we must eliminate the remaining Kreegans and Nighon forces from the mainland, then pursue them underground, and drive them back to the shores of Nighon.