Fourth scenario of the Birth of a Barbarian campaign.

The time spent in Tatalia wasn't very long, and you were quickly on your way to Erathia in search of Falor and Terwen. With any luck, the Erathians will be less hostile than the Tatalians were. 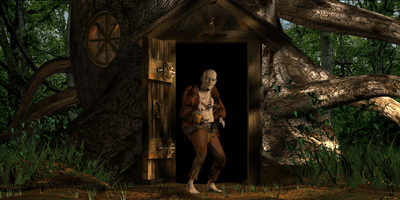 Yog : I gave up the first piece of the Sword, although I had to resist all of my wizardly training to do so. Now I am to find the hut of a seer named Falor and give him two more pieces: the Celestial Necklace of Bliss and the Lion's Shield of Courage. This will be no simple errand, for the Erathians don't take kindly to large armies traipsing across their country.

Yog must deliver the Celestial Necklace of Bliss and Lion's Shield of Courage to Falor and Terwen to win the scenario. However, if Yog is defeated in combat or loses either artifact, the scenario is lost. Yog is limited to level 21 but will carry his experience and skills on to the next scenario.