The first step in our fight to free Erathia is to liberate the capital of Steadwick from Nighon occupation. This will not be an easy task, as the Dungeon Overlords have blocked the mountain passes leading into the Steadwick Valley. 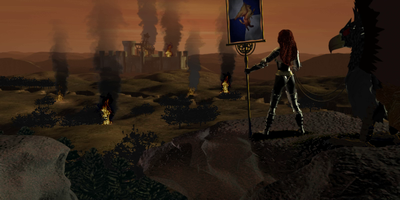 Catherine : Early intelligence reports forces from Nighon and Eeofol have barricaded themselves inside Steadwick. All land access to the capitol has been blocked. Their reinforcements arrive via underground tunnels. Armies from the west will meet us on the field of battle. There is little else to say. We do not stop until Steadwick is liberated.

To win, you must capture the city of Steadwick. Seek out the Seer - completing the Seer's Quest will allow you to carry the reward to the next scenario.