Our forces will cover most of the distance to the Erathian capitol by using underground tunnels. To maintain the element of surprise, you must attack any Erathian settlement you find. Use the vast network of caves in this area to accomplish this goal. 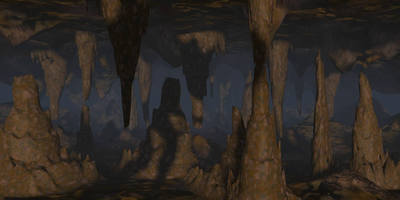 Reports claim a fleet of Enrothian warships have landed on the southern coast of Erathia. We do not know who commands this force, or its size. Through sources in Eeofol, we know Roland Ironfist cannot lead this fleet. Regardless, our plans remain unchanged. We start the last phase of our underground invasion and solidify our position along the southeastern coast. Afterwards, we can transport more reinforcements from Nighon. We have dug the last tunnels to this area. You will have the tactical advantage.

To win, you must capture all enemy towns and castles and defeat all enemy heroes. Your Heroes will be limited to 12th level in this scenario, but your 8 strongest Heroes will be available to you in the final scenario of this campaign.