Fifth and final scenario of the of the Birth of a Barbarian campaign.

The last leg of your journey has taken you back to Bracada. You realize that Aine will probably be waiting for you. Despite this, you decide you don't really have a choice, so you break camp and set out to search for Beleg and Orruk. 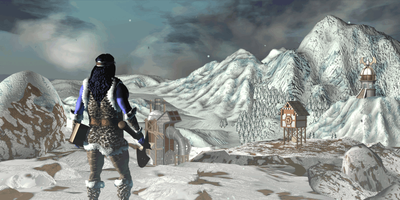 Yog : The last of Winston Boragus' tests will take me back to Bracada, my forsaken homeland. I am to find a couple named Beleg and Orruk and give them the two most powerful pieces of the Angelic Alliance: the Sword of Judgment and the Helm of Heavenly Enlightenment. That will be the easy part, now that I am certain I am ready to give up the ways of magic. The hard part will be fighting my way past Bracada's armies, for they will not be as willing to give me up.

Yog must deliver the Heavenly Helm of Enlightenment and Sword of Judgment to Beleg and Orruk to win the campaign. However, if Yog is defeated in combat or loses any artifact, the scenario is lost. Yog is limited to level 25 but will carry his experience, skills and spells on to his next campaign. 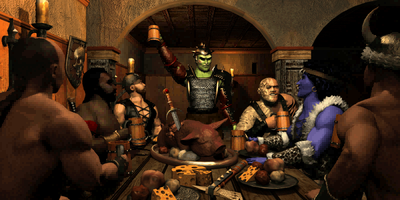 Yog : I have passed all the Duke's tests, proving I have given up magic forever, and he has accepted me into his Barbarian horde! My mother would no doubt be disappointed in me, but now my new Krewlod family welcomes me with raised tankards and promises of many adventures to come!