To Strive, To Seek

Gem and Gelu are seeking parts of the "Angelic Alliance" in a region of Erathia bordering AvLee. Two warlords rule this land, and their allegiance is loosely tied to Erathia, so they'll have to be "persuaded" to relinquish these artifacts of power. 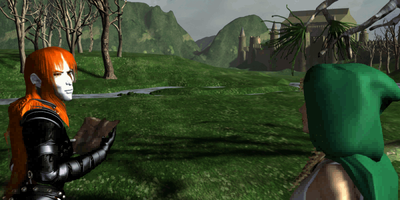 Gelu : I know this region well. The lords who control this area are loyal to Erathia but only when it suits them. We must be careful, for they are formidable foes and deeply entrenched. But if we are to locate the pieces of the Angelic Alliance, we may need to "persuade" these lords to assist us.

Gem and Gelu must find the Sandals of the Saint, Helm of Heavenly Enlightenment and the Necklace of Celestial Bliss to win the scenario. However, if either hero is defeated in combat, the scenario is lost. They limited to level 37 but will carry their experience, skills and spells on to their next