The town of Hartferd has remained independent because the two lords of this region have been too busy fighting each other to turn their greedy eyes on new territories. Recent rumors place the Legion artifact in the vicinity, so life in Hartferd is likely to get a bit more complicated. 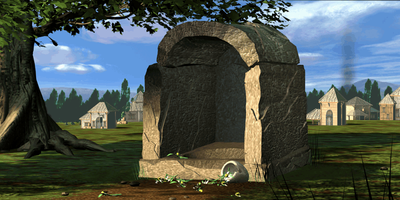 Crag Hack : On my way to visit some relatives in Erathia, I came across a village that had its sacred artifact, The Head of Legion, stolen. The mayor wants the head back as well as the other pieces of , if I can find them. This is just what I need to lift my spirits, some fun!

Crag Hack must find all the pieces of Legion and return them to the town of Hartferd to win the scenario. However, if Crag Hack is defeated in combat, the scenario is lost. Crag Hack is limited to level 30 but will carry his experience, skills and spells on to his next scenario.