The presence of the Necromancers in Erathia is much stronger than you first anticipated. It's apparent you can't win this battle alone, so you seek help. Your choice of an ally was obvious, but Crag Hack wasn't easy to find. It took even longer to convince him that these "spell casters" had to be stopped. In the end, it was Crag Hack's unquenchable desire to smash undead that convinced him. 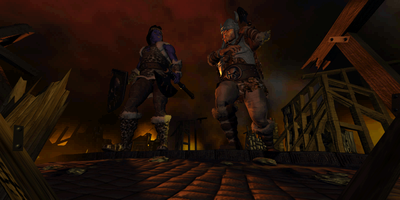 Yog : We two Barbarians were glad to have found each other in this land of strangers. Both of us are following the trail of the Necromancers, but I am shocked that their actions seem to have gone unnoticed by Erathian leaders. Crag was not interested in investigating my concern further until I mentioned his glorious battle. That always works with Barbarians like him.