Search for a Killer

Gelu has been summoned to investigate the death of Lord Falorel. Many believe poison is the cause. But Gelu quickly discovers that Falorel was never among the living. He was a vampire masquerading as an AvLee lord! 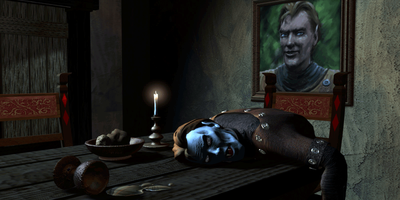 Gelu : This morning I learned Lord Falorel was dead, apparently from poison. What was learned soon afterwards has sent shockwaves throughout all of AvLee. He was actually a Vampire disguised as an Elvish warlord. I must find out who poisoned him and how he came to such a high position within AvLee.

Defeat all the Necromancers in the area to win the scenario. However, if Gelu is defeated in combat, the scenario is lost. Gelu is limited to level 30 but will carry his experience, skills and spells on to his next scenario.