(you may complete Faerie Dragons, the third scenario of the campaign, prior to this one).

Now in search of the mighty Azure you hear of disturbances to the North. Burned villages and destroyed mines are causing the region to suffer. Without the mines in full production the region will not have the resources to defend themselves against Krewlod invasions or eat. Knowing you are the destined Dragon Slayer, it is time to follow the road north in search of ways to hone your skills. 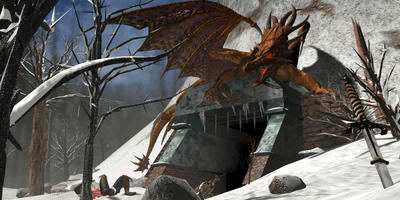 Dracon : Rust dragons have taken to feeding from the mines near the town of Ochre. These uncommon beasts have chased off the peasantry and now their livelihoods are in jeopardy. As a hero, I should do this for the town's people. Yet, I do this to hone my skills. Where rust dragons abound, the Azure may be nearby.

Rust dragons have invaded the area, halting mine production. Flag all of the mines within six months, but do not lose the Dragon Slayer or your cause will be lost. Dracon, his skills, spells and Experience up to level 24 will carry over to the next scenario.