A Necromancer is attempting to reach an Erathian outpost with proof of who killed King Gryphonheart. He is currently safe, but his way is blocked by undead loyal to their new King. You must escort him on the last leg of the journey. 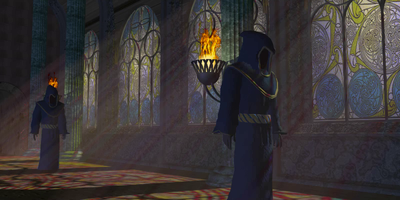 Catherine : Upon liberating Steadwick, my fears were confirmed. My father did not die of natural causes. He was poisoned. Investigations conducted by General Morgan Kendal prior to the war yielded no suspects. Now I learn the necromancers, seeking a military tactician equal to myself, have resurrected my father, King Gryphonheart. After killing King Vilmar, he took command of their military and their throne. Now they come to us. They cannot stop the monster they have created. As a gesture of good faith, they send a messenger to speak only to me. He will tell me who killed my father. Find this hero and deliver him to me safely.

To win, the Necromancer, Nimbus, must reach the town of Highcastle with the Statesman's Medal. At the end of this scenario, Nimbus and your 7 strongest Heroes will travel with you to the next scenario of this campaign.