Blood of the Dragon Father

Whoever gains the Vial of Dragon Blood and drinks the Blood of the Dragon Father with transform into a Sentient Dragon. You MUST beat Ordwald to the Vial and defeat its guardians. Nothing else matters. Nothing! 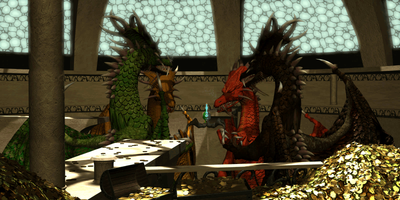 Mutare : I have found Ordwald. He is close to the vial, but his conservative actions and slow thinking leaves the way open for me to surpass him. As much as I must worry about Ordwald, I must consider the vial. Once I have passed him, there is the vial, and no doubt, it will have guardians... dragon guardians.

Find the Vial of Dragon Blood before Ordwald or lose the race. Also, losing the hero Mutare means instant destruction. Mutare and two of her best heroes will be transferred to the next scenario, without level limitations.