You face the last challenge in becoming a Dragon Slayer. You must complete the test course in six months or fail the test. The Crystal Dragons will be well guarded, the paths watched by other creations. Golems, Gargoyles and Elementals will try and stop you before you can kill the Crystal Dragon. 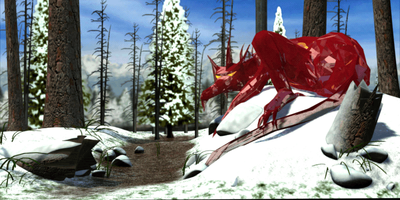 Dracon : My mother has finished preparations for my final test. The finest crystal, stealthily taken from the caverns of Krewlod, has been used to create a great dragon golem. This creature's construction is a feat of magical prowess. To destroy it... is an even greater feat. Yet, I have heard the greatest feat a dragon slayer can accomplish is to kill the rare a mighty Azure Dragon.

To pass the test you must kill the Crystal Dragon. Fail to kill the dragon within two months and you will not become a Dragon Slayer. Dracon, his skills, spells, experience and remaining troops will transfer to the next scenario along with the Diplomat's Ring. Dracon will be limited to level eight.