Valley of the Dragon Lords

Third scenario of the Elixir of Life campaign.

The Dragon Lords are not known for being all that reasonable, but perhaps you persuade them to part with the Ring without any bloodshed. 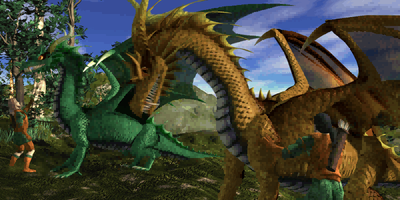 The Ring of Life, the second component of the Elixir of Life, is hidden in the valley of Dagrond. There lives a group of powerful Elven nobility who are the caretakers of several warrens of gold and green dragons. These Dragon Lords have always been loyal to AvLee, but we fear that one of these lords has been corrupted by the Necromancers. If this treacherous Dragon Lord gets the Ring before you, he will become an enemy too powerful for the forces of AvLee to withstand.

This valley is land of the Dragon Lords. They must be defeated and the Ring of Life located to win the scenario. However, if Gelu is defeated in combat, the scenario is lost. Gelu is limited to level 20 but will carry his experience, skills and spells on to the next scenario.

(Note that this time only Gelu carries over for real!)