This relatively rocky part of Avauntnell has been home to many a Barbarian group over the centuries (probably due to it being close to Krewlod). Numerous attempts at Erathian settlement in this area have mostly failed due to the harsh environment and the barbarian raids, but one or two towns might still be found. 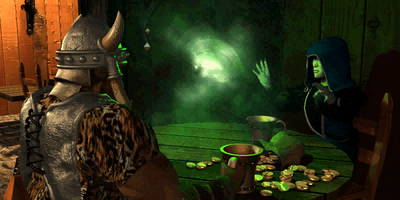 Crag Hack : After watching me clobber a pack of goblins in a bar fight, a Wizard named Sandro asked me to come to his table. He wants to pay me to find him something called a Skull Helmet. I'll probably have to bash someone's head in to get it. Sounds like it's going to be fun!

Crag Hack must seize the first artifact Sandro requires, the Skull Helmet, from Barshon the Barbarian to win the scenario. However, if Crag Hack is defeated in combat, the scenario is lost. Crag Hack is limited to level 10 but will carry his experience, skills and spells on to the next scenario.