An ambassador from Bracada brings a message from his leader, Gavin Magnus, offering aid in reclaiming Western Erathia from the marauding Tatalian and Krewlish forces. It is time to remind your neighbors of where their borders belong. 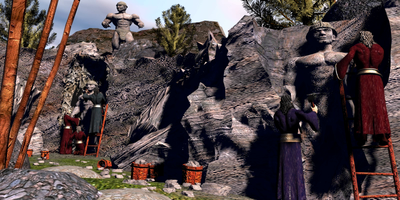 My name is Winstan Langer, ambassador from Bracada, ruled by Grand Vizier Gavin Magnus. Forces from Tatalia and Krewlod are fighting in west Erathia. After months of conflict, the battle still rages. Though weary of yet another war, my king sends reinforcements to aid your efforts. Brilliant tactics will not win this battle. Body count will determine the victor. Good luck.

To win, you must capture all enemy towns and castles and defeat all enemy heroes. Some Border Guards can only be passed if a Hero carries a Quest Artifact from a previous scenario, but the artifact beyond the Border Guard will travel with you to the next scenario.