First scenario of the Rise of the Necromancer campaign.

Ethric is a sly old Warlock. He has spread word of Sandro and the artifacts he carries to the lords of this region. Some of the lords want these artifacts for their own use; others want to destroy them. Sandro must defeat all these lords and get into Deyja. 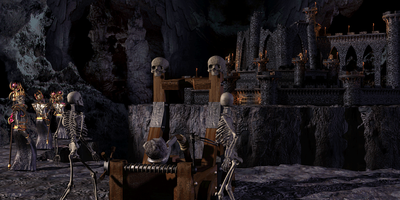 Sandro : It seems Ethric, my old master, has finally tracked me down. He hasn't been too happy about me becoming a Necromancer and wants to remove the blight from his career. Ethric is no fool. He spread word of my location to those who would stop me. It does not matter. I will defeat these fools, soundly beat my master and continue on to Deyja, where they will appreciate my talents.

Defeat all of Sandro's enemies to win the scenario. However, if Sandro is defeated in combat, the scenario is lost. Sandro is limited to level 5 but will carry his experience, skills and spells on to the next scenario.