Before we can declare our independence we will need a symbol. That symbol is the Grail, which was lost in this area centuries ago. We must find it, or our plan will dissolve even before we can set it in motion. You have but three months to locate the Grail. 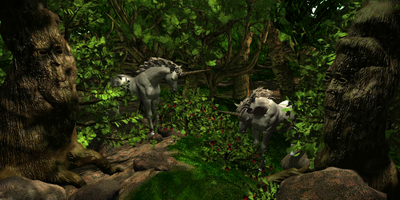 For the first time in the history of the Contested Lands, humans and elves have fought alongside one another to defend the region from invaders. When the celebration is over, old hatreds will return and we will be citizens of a land in conflict. We must think about the future of the Contested Lands. It is time to shape its future. If our fight for independence is to succeed, we need something greater than our armies to motivate the populous. We need a symbolic cornerstone. Seek out the Grail in the enchanted lands where the Unicorns converse with the trees.

To win, you must find the Grail within 2 months.