Queen Catherine has departed to elicit military support from King Gavin Magnus of Bracada. Other generals are fanning through the region. Establish a base of operations, rally local militia, determine the extent of the Nighon occupation, and find their invasion route. 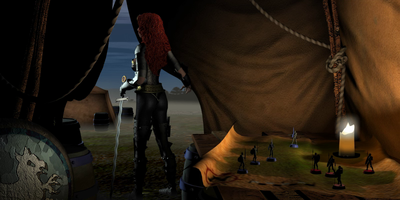 Catherine : Our initial landing has captured a devastated outpost. Information is scarce and unreliable at best. Neighboring citizens have fled their villages. Remaining survivors tell conflicting stories. Evidence points to a Nighon invasion. Rally local militia and train them quickly. Destroy all hostile forces you encounter. Assume the worst. Assume we are at war.

To win, you must locate and capture the town of Terraneus. Your Heroes will be limited to 6th level in this scenario, but your 4 strongest Heroes will travel with you to the next scenario of this campaign.