Eighth and final scenario of the Armageddon's Blade campaign.

The Kreegan race borders on extinction, yet remains defiant. King Lucifer has sent for aid from the Overlords of Nighon. It is estimated that it shall take no more than 60 days for an army to arrive and reinforce the Kreegan king. The tide has turned as Catherine's army now has the Blade and the irony of Lucifer's downfall under the Blade he created to destroy the world has not escaped Catherine. She intends to bring the Blade to Hell itself if need be. 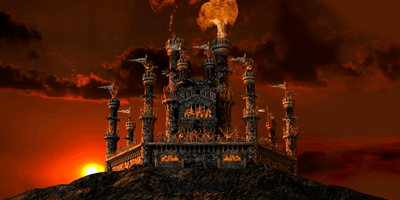 Catherine : Armageddon's Blade is no longer a threat. However, King Lucifer Kreegan still sits upon the throne of Eeofol. What few clans remain have rallied to defend their king and his lost cause. Erathian spies tell us the demon king has requested support from the dungeon overlords of Nighon. We cannot confirm this. If it is true, we cannot allow Lucifer to receive this aid. We must dethrone the demon king. Time is short, but now we wield Armageddon's Blade. It is time we take armageddon into the heart of hell itself.

You have 60 days for Gelu to take Armageddon's Blade to the Eeofol capitol of Kreelah before the forces of the Dungeon Overlords arrive to reinforce King Lucifer. If Gelu, Roland, or Catherine is lost, your war ends here. 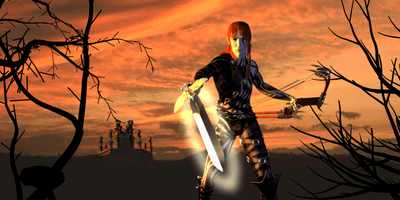 Catherine : Lucifer Kreegan is dead. The few remaining Kreegan clans have gone into hiding. All but a few of the elemental Confluxes have disappeared. I am sure we will see them again... if needed. As for myself and Roland, we will soon depart for Enroth and I will see my son again. As for Gelu, I left Armageddon's Blade in his hands. Following our victory, he and his guerilla army vanished into the Erathian forests. I do not know if he intends to destroy the weapon... or keep it for himself. In time, I am sure we will all know.