Third scenario of the Birth of a Barbarian campaign.

You left the meeting with Boragus in a very happy mood. Wanting to prove yourself, you hurry off to Tatalia to deliver the first two pieces of the Armor of the Angelic. At first you thought this would be an easy task: you would walk into town and give the first two pieces of the Angelic Alliance to Alendora. After a few days ride from the border, you discover that Tatalians aren't going to make it that easy for you. 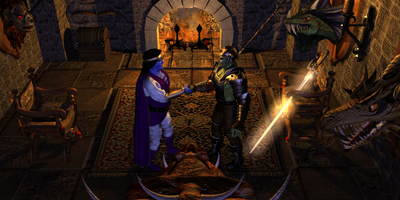 Yog : When I confronted Winston Boragus, he admitted to setting Krewlod's armies against me to test my worthiness to join them. At first I was angry at this deception until the Duke pointed out that it was I who wanted to be a fighter. The Barbarian within me saw his point. But Boragus has a test designed to see whether I am truly ready to part with the Wizards of Bracada. I must take the magical Angelic Alliance sword, break it apart and distribute the pieces throughout Tatalia, Erathia and Bracada.

Take the Sandals of the Saint and the Armor of Wonder to Alendora to win the scenario. However, if Yog is defeated in combat or you lose either component of the Angelic Alliance, the scenario is lost. Yog is limited to level 18 but will carry his experience and skills on to the next scenario.