The time has come for you to challenge the elders for leadership. Like other young prospects of the tribe you must pass through three tests. The first test is simple, kill an Ancient Behemoth. For three generations the Ancient Behemoth Razor Claw has resisted attempts to kill it off, now it is your time to make the attempt. Complete this simple task to continue with the festival of life. 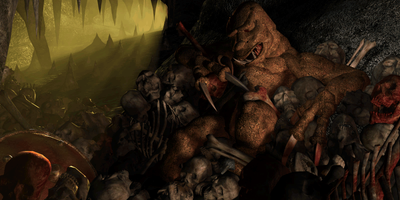 Kilgor : Alongside my father I have killed Behemoth before, but never an Ancient Behemoth. To contest the throne, I must slay one of these fearsome beasts. I relish the encounter. After I have slain this one, I will know how to subdue them. Then I will employ them in my bloody ascension to kingship.

The task of killing Razor Claw has been given to you. Prove yourself and defeat the Ancient Behemoth in three months or lose your chance at becoming King. If Kilgor is lost then his chance to become king ends also. Kilgor is limited to twelfth level.