The Grail has reached Welnin, but now we must build this city into a capital. Armies from Erathia and AvLee shall attack us from all directions. Soon we shall prove that the Contested Lands are theirs no more! 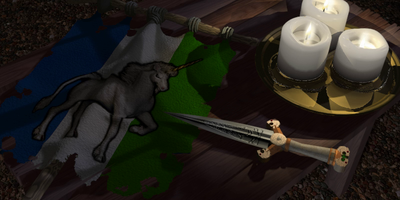 We have come far very quickly. Armies from Erathia and AvLee have arrived to 'restore order.' This jeopardizes our quest for independence, and such hostile elements could ignite a larger war. It is our duty to establish Welnin as the capitol of the Contested Lands and the drive rule of Erathia and AvLee from this territory. If we do not, we will lose all we have fought for and two great nations may once again re-enact the carnage of the Timber Wars. Today we declare our independence from the nations of Erathia and AvLee.

To win, you must build a Capitol in the town of Welnin. Only then will the Contested Lands be free!