First scenario of the Elixir of Life campaign.

This area is a special training area and is the site for your final exam. Many have failed this test, while more have passed it. Good luck. 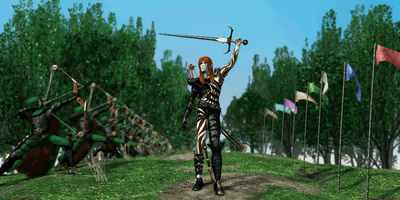 The Forest Guard is Erathia's eyes and ears. We go where we are needed most and that is usually places difficult for traditional fighting forces to reach. We are shadows of the forest that see all and bring silent death with a single, unseen bowshot. You have done well in your training, Gelu, but now has come the time to take the final test. A small valley near Gaia's Crest will be the site of this trial. Clear the region of all the enemies to earn your place among the ranks of the Forest Guard. Good luck.

Defeat all Gelu's enemies win the scenario. However, if Gelu is defeated in combat, the scenario is lost. Your heroes are limited to level 10, but Gelu and two other heroes will carry their experience, skills and spells on to the next scenario.