Deal with the Devil

A letter from Lucifer Kreegan III, Lord High Commander of Eeofol, arrives at the palace for Queen Catherine. In it he claims that he holds a captive, Catherine's husband, Roland Ironfist of Enroth, and that only a one million gold ransom can save him. 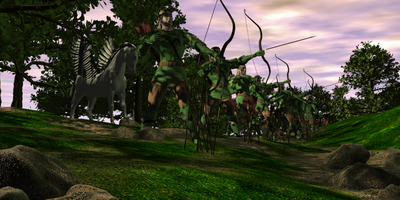 My name is Dorrell, ambassador from AvLee. I bring a message from Queen Catherine. After the liberation of Steadwick, a Kreegan envoy appeared before the royal court. He claims they have captive, King Roland Ironfist of Enroth. They are asking for one million gold ransom. We cannot validate this claim. True or not, Queen Catherine is unwilling to pay. After interrogating the envoy, we learned Roland is held deep inside Eeofol by Clan Kreelah. Locate Clan Kreelah's base of operations and rescue Roland. In addition to your Erathian army, we will support you from AvLee. This mission is of utmost seriousness. You may rescue Roland, or find yourself the victim of a trap.

To win, you must capture the city of Kleesive. Some Border Guards can only be passed if a Hero carries a Quest Artifact from a previous scenario, but the artifact beyond the Border Guard will travel with you to the next scenario.